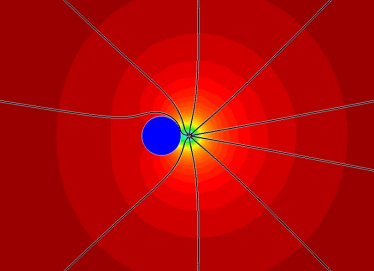 Anode resistance is a fundamentally important quantity which is used in all CP system design work in the marine environment.

Established methods for calculation of anode resistance determine the resistance through the electrolyte between the anode surface and ground (or “remote earth”), and are based on analytical or approximate formulas. Such formulas are generally based on simplified anode geometry, such as long thin cylindrical bars, and may include effects of interference between multiple such bars grouped in fairly simple geometric patterns. Resistance to ground of real anode shapes may be very different from formula-based predictions even for single anodes, and computer-based simulation methods are now available to determine resistance to ground both readily and more accurately.

While resistance to ground is a very useful measure of likely anode output, in particular when accurately calculated for groups of nearby anodes such as those mounted on a sled, it is nevertheless the case that resistance to ground may be unrepresentative of performance of the anodes delivering current to the cathodic surfaces of the structure on which they are mounted.

This paper investigates resistance through the electrolyte between the anode surfaces and the surfaces of the cathode, using techniques which include polarisation effects on the cathode surfaces, and compares the resulting resistance to cathode with values of resistance to ground which have been determined using formulas and by computer-based simulation.

To get the full publication please Open the Publication Below