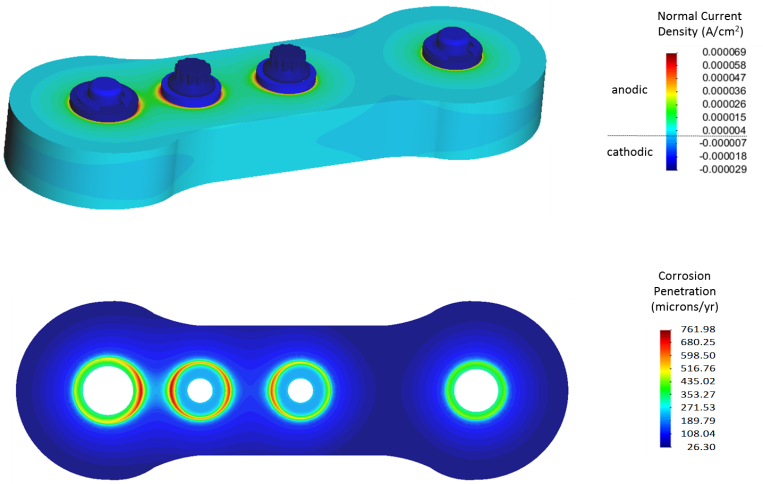 A representative aircraft galvanic assembly was designed for exposure testing following review of an F/A-18 Outer Wing Teardown Inspection Report.  This design is based on a simplification of an aileron attachment hinge.  Key considerations in the design include using multiple aerospace metal alloys for components, maintaining a similar combination of bushing and fastener geometry, and ensuring a non-symmetric layout to promote discrete areas of galvanic damage.

A BEASY Corrosion Manager computational corrosion model was developed based on this design and used to predict areas of high galvanic stress.  The model geometry is first discretized with elements using an appropriate meshing scheme. Boundary conditions based on the electrochemical kinetics (e.g. polarization curves) are then applied to represent the various component materials.  Lastly, the characteristics of the electrolyte film (e.g. conductivity, film thickness) are assigned.  In order to match the outdoor exposure environment as closely as possible material polarization curves obtained using an artificial seawater electrolyte, were used as input in the computational model.

To download BEASY documents we require data from you, please fill in the form provided and the material will become available to download